Posted at 01:17h in Uncategorized by admin 0 Comments
0 Likes

Great intro tonight…5 more folks showed up and got welcomed to the family. There’s no time like the present to come be apart of PSKC. Any new members who sign up before September 1st will be locked into the $50/month rate before the new pricing goes into effect. If you’ve been on the fence, now’s the time to jump off of it and start the path to becoming strong.

This week has been already filled with some great workouts. Monday we worked on some strength development working on cleans, ring dips, and front squats. Followed by a sprint finisher of 3 rounds of gate sprints coupled with 10 X burpee box jumps.

Tonight we went back to our “roots” with a nasty kettlebell complex after we put in some gymnastic work on handstand pushups and knees to elbows.

We’ll be back at it tomorrow with the 6pm and 7pm options. Recently I ranted about how I can’t stand to hear people complain about the heat (click HERE). Essentially the point was, if you think it’s bad …it can always be worse.

The story of Louis Zamperini is the epitome of it can always be worse. If there’s one book you need to read this summer it should be UNBROKEN. The story of Zamperini is amazing and truly incredible…it’s ultimately a story of survival, persistence, attitude, and redemption. 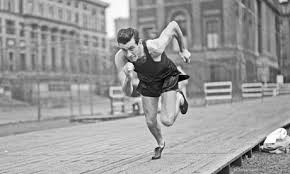 Louie was an Olympic runner in 1936, the youngest on the team who was known for his incredible finishing “kick”. He was all geared for the 1940 Olympics when war broke out. He then enlisted to become a bomber pilot on the Pacific. This is where the story gets interesting…

His plane crashed…he not only survived, but he survived 47 days on a raft fighting sharks and starvation. He then washed up on an island. The only problem was it was a Japanese occupied island…after surviving 47 days at sea. He was a Prisoner of War (POW) in a heinously cruel Japanese POW camp. Because of his celebrity status of as an Olympic was beaten repeatedly for several months…yet he continued to keep a positive attitude…he continued to SURVIVE.

Please take a few minutes and watch this news clip on his story. You will become a better person for knowing the story of Louis Zamperini, fast forward to the 10:00 mark and enjoy…

Before then, I want you to