22 May Honor the Fallen 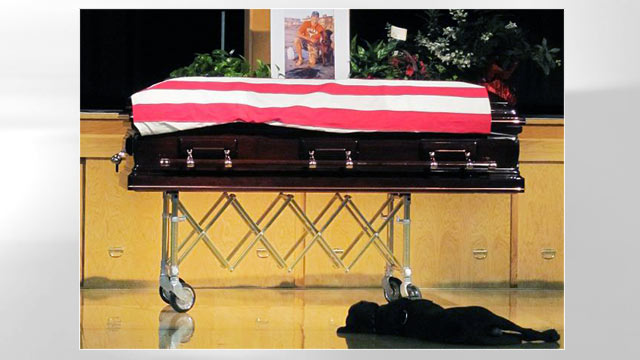 loyal to the end

6805…that’s the current number of military servicemen who have given their lives during the Iraq and Afghanistan wars. 6805 families who will spend this Memorial Day weekend without their sons or daughters.

As you celebrate this weekend, keep them in your mind and in your heart. These men and women and the brave ones before them have shed their blood and gave their life for their country…for you…for your freedom and the privilege to live in this country. What have you done for them?

Give 5 minutes out of  your day to be completely present and honor their sacrifice. Do not mourn their death,  celebrate their life.

“It is foolish and wrong to mourn the men who died. Rather we should thank God that such men lived.” – GENERAL GEORGE PATTON

“The senior enlisted soldier for 2nd Battalion, 5th Infantry Regiment has died from wounds suffered in Afghanistan, the Defense Department announced Thursday. Command Sgt. Maj. Martin Barreras, 49, of Tucson, Arizona, died Tuesday at San Antonio Military Medical Center in Texas. He died from wounds suffered on May 6 in Herat province, Afghanistan, when enemy forces attacked his unit with small arms fire, according to information released by DoD. Barreras became the top enlisted soldier for 2nd Battalion in March 2013. The unit is part of 3rd Brigade Combat Team, 1st Armored Division at Fort Bliss, Texas. “Command Sgt. Maj. Barreras was my friend and battle buddy,” said Lt. Col. Edward Brady, the battalion commander, in a statement. “I’ve spent more time with him than my wife since I’ve taken command. I believe that I was the luckiest battalion commander in the Army to have him as my command sergeant major. “While every soldier in this formation is extremely saddened by his loss, his Bobcats are doing exactly what he would expect of us: continuing on with the mission and taking the fight to the enemy. This man would do absolutely anything and everything to ensure his soldiers came home safely.”

I encourage to click HERE to see the faces of the fallen, and read about them.  Take your time, pick a face and remember their name, honor their sacrifice and thank God for them.

We will be doing our annual Memorial Day Murph workout on Monday at 0900 in honor of all those who have answered the call. It’s our small of honoring their sacrifice. This event is free and open to all. No matter your current fitness level you can participate and we’d love to have you. If you can’t make Monday, some folks will be doing Murph this Saturday at 0600.

As you go to bed tonight, remember that face, remember that name. Hug your kids and/or loved ones extra tight today for them. That’s what they would want.